This month, one Sunday, me and my friend decided to embark on yet another green trip, combining a train + bike ride inland Andalusia. We both wanted to try out this way of discovering the nature and springtime landscape around, without the need of taking the car out. Inspired by the birding experiences and interesting, and flat landscape of Fuente de Piedra, I took some time to plan a day trip from Malaga. 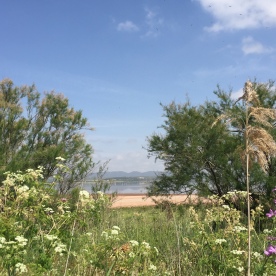 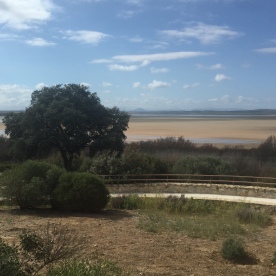 Since Malaga is one of the most steep & mountainous provinces in Spain, ‘a relaxed bike trip’ is an oxymoron for most times. Also, some roads tend to have heavy traffic and I don’t enjoy it this way, as I consider it dangerous. The bike & train trip to Fuente de Piedra seemed to match all the criteria: several regional (MD or AVANT) trains passing by during a day, allowing to take a bike for free onboard and a great 40-45 km bike circular trail. We didn’t know though that AVANT trains only allow a foldable bike to take, which reduced our possibility to travel only with Media Distancia types of trains which have a broad bike and wheel chair compartment for our gravel/city bikes. However, it is not common to see a lot of bike tourism, and is better to double check if the train you’re planning to take offers enough space by letting the station officer of RENFE know about your plans (!).

Everyone we met was very helpful though and we managed to get to Antequera-Santa Ana without any problems. The train ride itself was a bliss – passing by the famous Caminito del Rey or more ancient (and dangerous!) Caminito del Principe, we saw fellow hiking groups waving at our train going on and off through the mountain ranges. Incredible how much flatter the landscape becomes after passing by the stunning Torcal and moving towards the Antequera province. From the Antequera-Santa Ana we took off on MA-5406 road only to turn left through olive groves and wide, blossoming meadows. 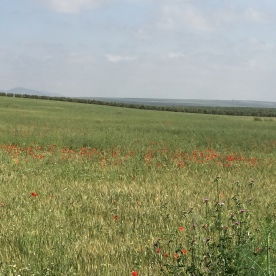 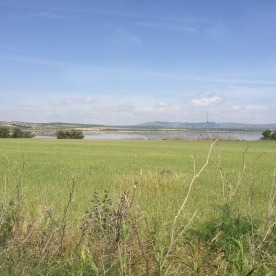 The landscape was far from flat so the bike ride required some stamina, especially that we needed to shorten our route as we wanted to catch the MD train, 3 hours before the originally planned AVANT. We could observe countless birds of prey such as black kite, marsh harrier and buzzards in the air and hundreds of egrets, flamingos and stilts closer to the lagoon, considered one of the most interesting birding spots in the region. We were also glad to hear and then see a loud, territorial hoopoe in flight. 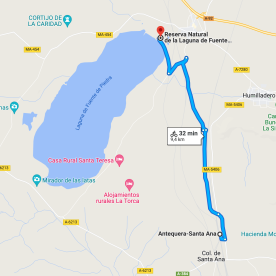 Sadly, I didn’t manage to take any interesting bird pictures on that day, but was focused more on the route, keeping the tempo while pedalling through the hilly landscape around the lagoon. Above I attach the idea of how much it takes according to the Google Maps, but you should probably add 30-40% to it, as the roads are mostly gravel and not too well kept at times. The final part we decided to take via the olive groves and not A-384 road which is quite busy. It was getting quite warm and steep, but the final ride was worth a million of sweat drops left on that day. When we arrived back to the station, the conductor was waiting for us, making sure that the adventurous bike friends caught the last train on that day back.