Those who know me well, know for a fact my sheer love for birds, and a guilty pleasure passion for the old-timer Scooter band. Quite recently though I found a brand new passion of this world: snorkeling with various school of fish! This post is dedicated to them, the recovery after a few weeks of feeling not too great and the happiness to be on the road again. As I tend to say, 2021 summer for my age group is again not a full-on vacation, it’s most importantly: the vac(cin)ation. All that in the surge of the new variants of the virus which you can still get in between the doses. Celebrating our relative immunity, we went to spend a weekend in La Herradura, about an hour drive away from Malaga, in the close vicinity of Nerja.

As snorkeling became our new passion and the most mindful way of getting back to health, we chose that rocky, rugged seascape of la Costa Tropical, which is the common denomination of the Granada province coast. The part of the national road N-340 is especially plausible for the type of admirer drivers who enjoy the winding curves alongside the sea and the mountains. The entry to La Herradura leads through a particularly narrow two-way street where it is recommendable to honk, announcing your presence. Despite the summer traffic, I find that in this part of Spain it is possible to get out of any situation or trouble without too much stress.

We stayed close to the hiking route to Cerro Gordo and Playa La Calaiza where we managed to spot several fish species on the same evening after our arrival. We also spent a nice evening in the Restaurant Dis Tinto, where apart from delicious food served from the mane oven, several and not trivial red wine all-encompassing various Spanish tiny wineries is on the offer. On the second day due to a strong wind we went on a hike around the Cerro Gordo ending up our passage on the beautiful Cantarrijan Beach. 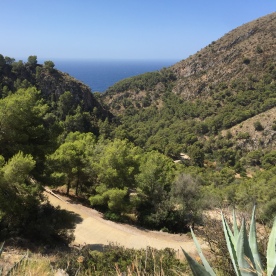 As the strong levante wind decided to blow during the whole weekend producing over two-meter waves, the weather was probably the best to get a full-body tan given that the beach is primarily destined for the naturalists. I can’t answer the question of how much is the fish in there to Scooter’s HP Baxxter, but possibly I will need to return to do so. There is definitely much more to do around La Herradura and the town itself has a bit of a summer resort vibe. As we were exhausted after the summer of work, recovery and craving the nature, we focused on the hiking and nature mostly. This time of the year is poor season for bird watching, though among the rugged terrain, you will most certainly spot a kestrel,  scanning the landscape on a dry outpost bench or a falcon hovering in search of the game.