August is undoubtedly the hottest month on the Iberian Peninsula and I feared that at some point I won’t be able to bear with it. Apparently, Malaga was not as bad as the rest of the continent, especially thinking about how global warming has been affecting Europe in the past years. The most unpleasant days were around the second week of August where the famous Terral wind started to blow. I’ve never experienced a wind which is as hot as 40 Celcius degrees with the speed reaching 40 km p/hour – it really felt as if the air was coming out of a hairdryer. 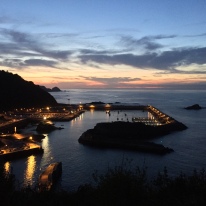 August is also a month when the most (in)famous festivity of Malaga takes place: La Feria. It is about 10 days of celebration of the local folk tradition, including bull fighting, horse riding, and most importantly: flamenco dancing and Cartojal (sweet, strong wine) drinking. This attract millions (!) of national and international tourists every year, making Malaga allegedly unliveable. This also turned out a myth, since the festivities were distributed around the whole city, and not only the city centre, while the municipality of Malaga made a special effort to keep the whole area very clean and vigilant for common vandalism. Not knowing about these two happenings of the month were not as bad as the word of mouth, I decided to escape for five days into the North of Spain: the green coast of Asturias.

After visiting Basque Country many years ago, and Galicia last year, I was the most curious about the coastal hiking in this mostly rural and unspoilt region of Spain. Landing in Asturias, I already felt the change: it was probably 10 degrees less than in Andalucia, and I got almost dizzy with the fresh air coming from the Atlantic Ocean and the surrounding woods. Quite a change after the hairdryer Terral just a few days before.  I was not too ambitious when it comes to the scope of discovering the region: since I only had 5 days, and no car, I focused on the western part of the region, leaving the higher mountain hike and the eastern routes for some other occasion.

On purpose, I stayed in a very small village nearby a more popular, touristy town of Cudillero when I only visited when in need (of food mostly). Due to its rough coastline, to visit the town, I had to descent about 700 m down with the slope of about 90%. Not to mention coming all the way back uphill. What helped to achieve this, is definitely the local food: Spaniards warned me about the size of the portions offered and they were indeed large and tasty. I’ve eaten probably the biggest and most impressive mariscada in my life in the restaurant called simply El Pescador in Cudillero, boasting a Michelin recommendation this year. 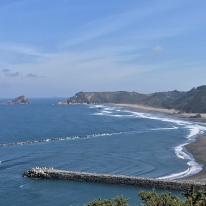 Another hiking highlight was the route called Senda Costera from the picturesque village called Muros de Nalon until the river port San Esteban de Pravia. It takes a few hours to walk through a path throughout the Atlantic forest, with a possibility to descent into the wild, Atlantic beaches.

Asturias is not only nature though, it’s also a maritime and industrial patrimony, visible in the cities like Aviles or Gijon. Although the focus of this trip was mostly on hiking (and eating out!), I managed to visit both cities – the most interesting is probably the cultural centre of Oscar Niemeyer, the architect of Brasilia and simply admiring the difficult charm of the long, post-industrial sites. To finalize the visit, on a last, rainy day in Gijon, I tried the Michelin start restaurant situated in the green Asturian park: La Salgar, run by the chefs Esther and Nacho, offering amazing experience for relatively reasonable price. Overviewing a typical, Asturian horreo, tasting the local food with the creative touch, I decided I will return to this mysterious, strangely beautiful part of Spain one day again. Who knows if not to retire.