The first time I heard about Iguazu was neither in my geography class or by reading a travel magazine. My first memory of seeing enchanting scene shot on the Argentinian side of the Iguazu Falls, was in Wong Kar Wai’s legendary movie “Happy Together”. So my dream started, like it happens sometimes, because of the powerful art:

I finally visited Iguazu Falls in September 2013, as a part of my trip around Southern Brazil, Uruguay, Argentina and Paraguay.

This magic land, striped between three countries separated by the natural border of the Parana river, is indeed a must-see for the nature-loving souls. 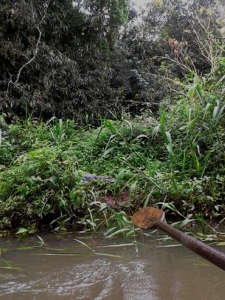 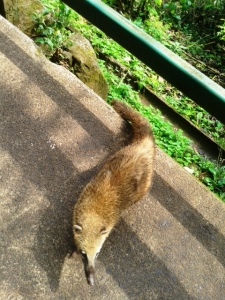 While hiking, or swimming down the river one can notice a plenty of wild animals such as aligators, tucanos, araras and – last but not least: coatis. These cute-looking four-legged coons can be seen almost everywhere, and they are not scared of people at all (contrary to beautiful tucanos which have learnt not the best side of the humanity…). But watch out, they will not only beg you for food, they will simply steal it from you! 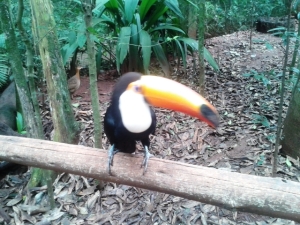 I chose to stay on the Argentinean side simply because it offered more hotel opportunities, but visiting the neighbouring countries is not an issue. However, it is considered quite a dangerous border due to high volume of smugglers. They say that Ciudad del Este in Paraguay has a fame for being quite dodgy, but I would just say that it was the least interesting part of the journey. When on the Brazilian side though, I would say that visiting the Birds Park is a must: there are some wonderful species living under protection and yet not afraid of people. All of the above-listed pictures of araras and tucanos were taken there!

Both sides offer spectacular views and wet experiences, but I would say that the Argentinian is better-suited for the hike, and Brazilian one: for photo-taking. It is also about broadening your perspective while chasing the waterfalls: either looking over the Garganta del Diablo from the highest highs in Argenting, or experiencing it’s powerful stream in Brazil. Or sticking to the river, following the ‘Waterfalls’ song’s logic: while in Paraguay.

One thought on “Chasing waterfalls”