This is my last post (for now!) about the paradisiac island São Miguel, the most accessible one from the Azores archipelago. I have already written about its very special capital, and about the inland treasures. There is probably much more to write about, but I deliberately would like to leave the pictures taken in Sete Cidades (“Seven Cities” in English) and on the shores of the island to speak for themselves. 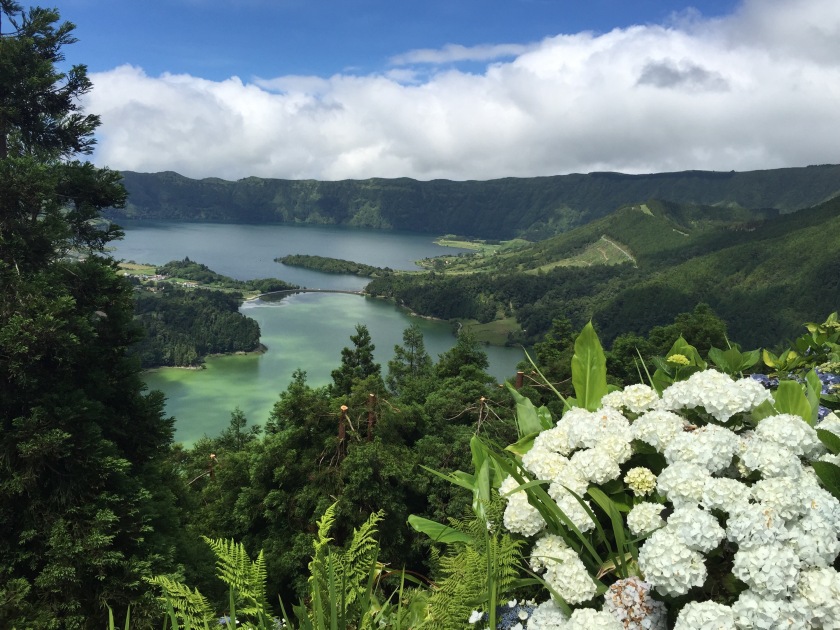 Panoramic view over Sete Cidades and its Green and Blue Lake (Lagoa Verde and Lagoa Azul). The name of the town comes from the times of building a sustainable, democratic power in this part of the island, taking the votes of São Miguel’s seven cities representatives.

Sete Cidades is located in the westernmost part of the island, in the picturesque setting of the crater lakes. The difference in colours comes from the fact that one is more affected by the algae. However, the effect is indeed magic, and could probably be a great Portuguese candidate for the Seven Wonders of the World.

On the northernmost shores of São Miguel one can experience equally breathtaking views and try tea or pineapple from the local plantations. Actually, Azorean tea is the only one remaining old-fashioned producer in Europe. The delicate taste of Cha (eng. tea) Gorreana reminds me of this wonderful trip anytime I drink it back at home…

To finish off this chapter, I would like to share my last moments on the Northern tip of the Island, where the peninsula is funnily shaped like a tartaruga (eng. turtle). I did not say ‘adeus‘, only ‘ate logo’. Next time I’ll visit Azores, I’ll try to sail or fly to the smaller, less accessible islands, I’m sure it’s worth to touch again this piece of paradise in the middle of the Atlantic Ocean.