Ponta Delgada means literally ‘Thin tip’, and is a capital of the enchanting archipelago of Azores I was lucky enough to visit a few weeks ago. But don’t be mislead by the name: its airport is definitely not such a thin stripe as the one on the Madeira Island and is already pretty busy. Ponta Delgada can be reached with the direct flights from Oporto, Lisbon, London and Amsterdam, and also from the other side of the Atlantic Ocean. 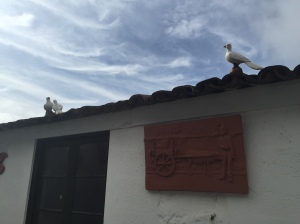 Since it’s the first year of having the low fare airlines operating to Azores, the question is: for how long will the islands stay so peaceful and conserve its remote charm? It is true that there are three times more cows than inhabitants of the São Miguel Island, still being the biggest one of the Azorean archipelago. There are not too many hotels, or pensions (I stayed at the Azorean Urban Lodge, and recommend this experience very much!). However, it already looks pretty welcoming and offering a great deal of the infrastructure, including organized trips, hikes and excellent cuisine to the visitors.

Some parts of the city look pretty abandoned, given the historical emigration rate, mostly to the East Coast of the US and Canada. Some buildings revive its ‘2nd life’ though, given the art-friendly policy of the city. Don’t be surprised if you notice some popular mural painters’ art on a random backyard street. Or if you see the endemite trees imported from the New Zealand during the colonial times. Expect the unexpected!

Nature and art, in a peaceful cohabitance, make Ponta Delgada a very special place. Be it Rainha das Bifanas (‘The queen of the beef sandwiches’ – very popular Portuguese dish), the ‘Lion King of Football’ (very popular house decoration) or a fancy mural. This coexistence of different styles, climate (be prepared for weather changing few times per day) and cultures makes this town very special, and hope that this will stay so charming regardless of the massive tourism knocking at its door. 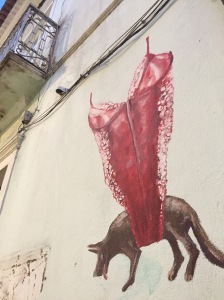 2 thoughts on “The thin tip or the capital of Azores”