Located about 50 kms east from Malaga, Nerja can be reached by various means of transportation, including a bike, which has lately contributed to great source of my well-being and happiness, while the times and the reality around us in the whole world are so uncertain. Although the path to Nerja is uneven, it may be reachable within a couple of hours’ drive, passing through various coastal towns which I can highly recommend. 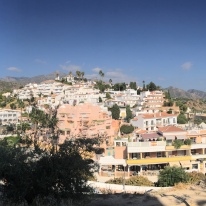 Nerja, under its Muslim name Narixa, meant an ‘abundant source’ and I could agree it has a lot to offer on various levels: culturally, naturally and culinary. It has been my third time visiting this coastal town, this time at the brink of the third wave of COVID-19 in Spain, during a long weekend of October.

Famous for its caves, where multiple events, such as concerts and dance festivals have been taking place, Nerja spans along a rocky coast of Maro Natural Reserve, reachable by hiking from the steep rocks, or by sea with the use of the paddle surf or kayak. We opted for the second one, and been incredibly lucky to see some corals, and the underwater sea life.

The Caves of Nerja were discovered accidentally by the local group of speleologists in 1959 and span across almost 5000 m, where only one third can be currently seen by the external, rookie visitors. Visiting the Hall of Nativity, the Hall of Cataclism, The Hall of Ballet and The Hall of Phantoms leave you with goosebumps. Being so close to spectacular formations, as well as the evidence of human presence from over 30000 years ago, is hard to describe in words. 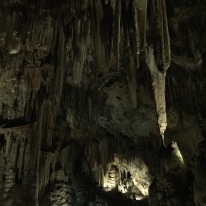 One obvious mental connection to this experience is the architecture of Gaudi’s La Pedrera and Sagrada Familia – although it is possibly pretentious to compare, the closeness of  such a beautiful natural phenomena immediately triggers the same response as participating with great art. This is when my boyfriend and I realized how much we miss art, venues and this transcendental feeling. 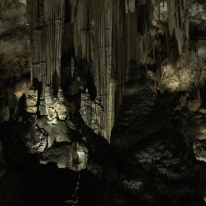 Nerja’s old town, including its famous Balcon de Europa was possibly different and quite empty due to first restrictions of COVID-19’s third wave. There were not too many people visiting, although it has been a national-wide long weekend, usually producing a lot of interest in visiting places like Nerja. We even chose to stay in an adult-only hotel, thinking of avoiding large families with children and this was a very good call for someone willing to rest well, after all. The real meaning of an adult-only hotel remains a mystery to me though which is a possibly a different topic to discuss. Possible features of such a hotel include interesting lightning in the room, set of jacuzzi and sunbeds on the rooftop (priceless in the warm October nights) and mostly, Instagram-influencers-looking couples spending most of their time posing to their stories, showing off their ‘fresh’ tattoos, bikinis or muscles (that’s not me, currently not in a possession of any of the mentioned features). 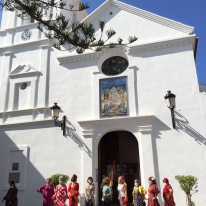 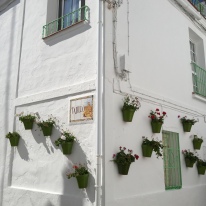 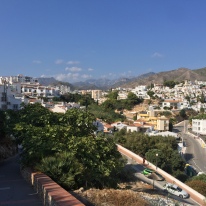 From the culinary perspective, Nerja has a few spots offering not only fantastic Spanish cuisine, but also as exotic as Nepalese or Polish food, for which we have to thank to our Spanish teach, Ricardo, for pointing us to this direction. I would love to repeat the visit time and again, on bike, not knowing how far we’ll get to and where we’ll stay. This feeling of the careless freedom of being outside is growing strong, although I know we need a bit more time to come back to whatever the new normality will be.

One thought on “Nerja – the abundant source of charm”